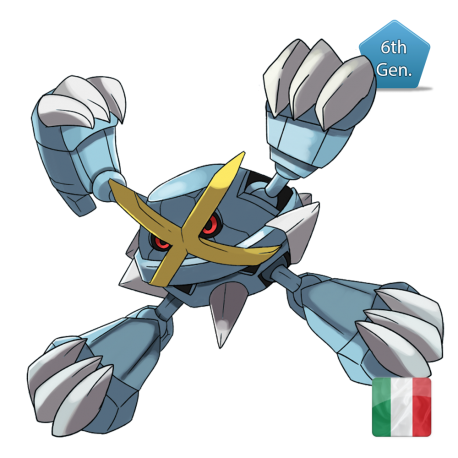 Shiny or non-shiny Metagross with 6 IVs. Adamant Nature and with Hidden Ability. It holds a Metagrossite for the megaevolution. Very competitive pokemon. High HP and Very Strong in Attack.

It evolves from Metang starting at level 45. It is the final form of Beldum. It can Mega Evolve into Mega Metagross using the Metagrossite.

Metagross is a robotic Pokémon with a turquoise, disc-shaped body and four legs. The main body appears to serve as both head and body, and this Pokémon’s overall construction gives it the appearance of a mechanized arachnid. It uses its heavy body to pin down its prey before consuming them with its large mouth. A large, metallic cross is situated in the center of its face. On either side of the cross, a red eye peers out from a space in Metagross's metallic armor. Its four legs are joined to the main body by ball-and-socket joints. While the upper portion of the legs is relatively thin, they are considerably thicker below the knee. Each leg has three short claws on the end and a flat, blunt protrusion extending over the knee. The legs can be tucked in, allowing Metagross to float in the air.

As Mega Metagross, it constantly floats, and its legs become arms. The cross on its face turn pale gold, and it gains two small holes and a spike immediately below the cross, giving the impression of a goatee. Its multiple brains process information simultaneously, enabling it to calmly assess the tide of a battle and defeat its opponent with accuracy. Mega Metagross also uses the psychic power inside its body to launch powerful attacks. Its claws are hard as steel and can easily smash even large chunks of rocks.

Metagross is the result of two Metang fusing together. This gives Metagross four brains in total, all connected by a complex network of neurons. Because of these complex connections and the number of brains, this Pokémon is capable of complex calculations and is more intelligent than a supercomputer. It uses its intelligence to analyze its opponents during battle. This Pokémon can be found on rough terrains.