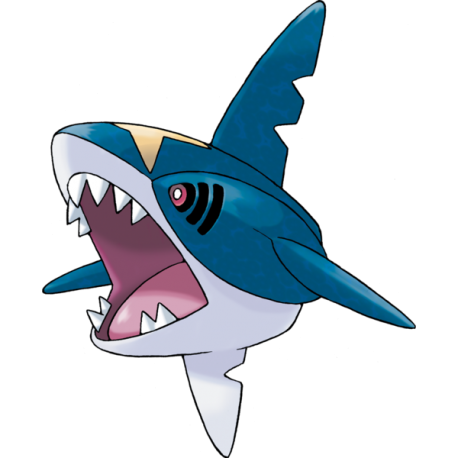 Shiny or non-shiny Sharpedo with 6 IVs. Naughty Nature and with Hidden Ability. It holds a Sharpedonite for the megaevolution. Very competitive pokemon. Strong in Attack, Special Attack and Speed.

Sharpedo (Japanese: サメハダー Samehader) is a dual-type Water/Dark Pokémon.
It evolves from Carvanha starting at level 30. It can Mega Evolve into Mega Sharpedo using the Sharpedonite‎.

Sharpedo is a torpedo-shaped shark Pokémon covered with tiny, sharp denticles. It has a large mouth filled with triangular, sharp teeth. Its eyes are a deep red color and glow in the dark. It has two gill slits situated directly behind each eye. It is mostly dark blue with a white underbelly. There is a yellow star-shaped marking on its snout, and another star marking on its rear. It has a tall dorsal fin with two notches cut into it, with a pelvic fin directly opposite it. Its two pectoral fins are arranged so that they resemble the fins on the back of a torpedo.
As Mega Sharpedo, the fangs in its mouth have transformed, and the horns that have sprouted from its nose can be regrown countless times. The yellow patterns on its body are scars carved into it in battle. With explosive propulsion, it can exceed 125mph in an instant.
Sharpedo can shoot out a jet of water, which allows it to swim 75 to 80 miles per hour. However, it is unable to swim long distances. It is feared and known as Bully of the Sea, or Gangs of the Sea as a group, due to its sharp teeth. Its fangs can rip through iron and steel, being able to tear apart a supertanker into pieces. When its fangs fall out, they grow back immediately. It lives in the sea.