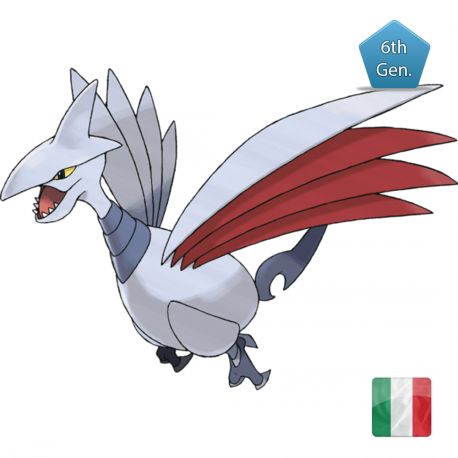 Shiny or non-shiny Skarmory with 6 IVs and Hidden Ability. Jolly Nature. Strong in Attack and Defense.

Skarmory (Japanese: エアームド Airmd) is a dual-type Steel/Flying Pokémon.
It is not known to evolve into or from any other Pokémon.

Skarmory is a silver-gray, avian Pokémon with a long, metallic blue neck, legs, and tail. It has yellow eyes, a pointed beak with several pointed teeth, and a triangular crest on its head. There are red feathers under the sheaths that cover its sharp wings, and each feather can be moved independently. Its wings are actually hollow, allowing it to travel up to 180 mph. Its feet have three toes on them, two in front and one in back, and its tail has hooked ends.
Its steel wings become tattered and bashed in from repeated battles, but once a year the battered wings grow back completely. This process restores the cutting edges. Its feathers are sharp enough to be used as blades. Its skin and feathers are solid because it lives and is raised in very harsh conditions. Its nests are usually found in thorn bushes, where continual scratching of its skin will eventually harden it into an iron-like state.