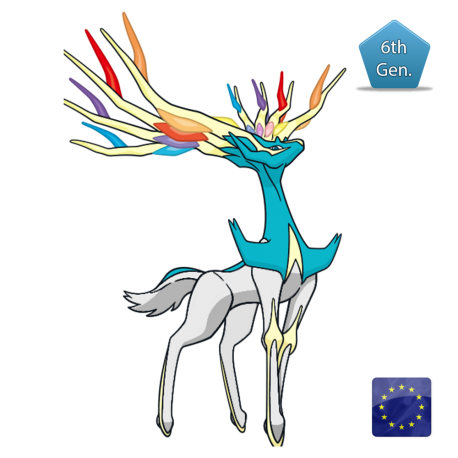 These Shiny Xerneas and Yveltal were distributed to players who inserted a serial code that was given away at various locations in select countries.

These Shiny Xerneas and Yveltal were distributed to players who inserted a serial code that was given away at various locations in select countries.

Along with Chespin, Fennekin, Froakie, and Yveltal, it was the first Generation VI Pokémon to be revealed to the public on January 8, 2013 as part of the Pokémon Direct broadcast.

Xerneas is the version mascot of Pokémon X, appearing on the boxart.

Xerneas is a blue and black, quadrupedal, stag-like cervine Pokémon with an eight-horned set of antlers extending out from its head, four on each side. Xerneas's coloration changes slightly depending on what mode it is in: Active Mode or Neutral Mode. In Active Mode, each horn is pale gold and adorned with a colorful, three-part glowing protrusion twining through the horn (orange, red, purple, and teal-blue), one side mirroring the other. The colors gradually turn lighter to darker when moving from base to tip. In Neutral Mode, the horns are pale blue and the protrusions the same blue as its upper body. Xerneas's head is blue with two horns on either side of its head, and the root of its horns mark its face, just below the eye and over the nose. Its eyes are the same color as its fur, and its pupils are X-shaped. The blue portion of its body ends at the chest area where the "fur" juts outward to the side, similar to the blue horns on its face. On its breast is an inverted V-shape that is also pale gold in Active Mode and pale blue in Neutral Mode. The inside of the V-shape is black and extends into its lower body.

The rest of its body is black with a blue stripe running along its spine; when it is in Active Mode, the shine from its horns decorate its back in small, multicolored spots. It has a slim, fluffy black tail where the blue stripe ends. Its legs are fashioned like blades with forward-pointing "hooks" at the tips, creating a cross shape, with the main "edges" trimmed with the same color as the horns (pale gold in Active Mode, pale blue in Neutral Mode); the trim on its forelegs further map a crude sword-like pattern: a long blade, a cross-guard, and a hilt.

Xerneas has the power to share eternal life; this occurs as the horns on its head shine in seven colors. When Xerneas is at the end of its life, it releases all of its life energy into all the living things in around it and transforms into a tree to sleep for 1,000 years. Xerneas also has the power to create forests, making Xerneas a benevolent force in nature. Xerneas is the only known Pokémon capable of learning the move Geomancy.