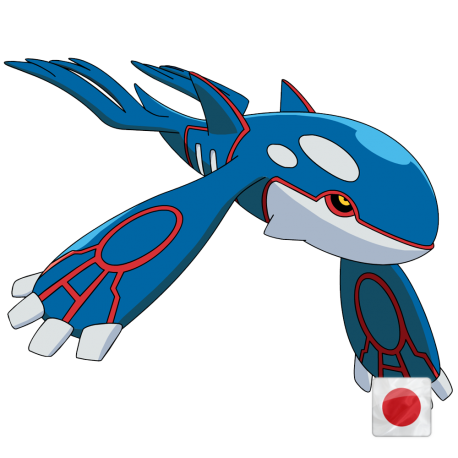 This Kyogre was distributed at various department stores across Japan from November 21, 2012 to January 10, 2013 to celebrate the tenth anniversary of Pokémon Ruby and Sapphire.

While it is not known to evolve into or from any other Pokémon, it can go under Primal Reversion and become Primal Kyogre if it holds the Blue Orb.

Kyogre possesses the ability to expand the oceans. In ancient times, it came into conflict with Groudon, a Pokémon with the ability to expand continents. In Pokémon Sapphire, Emerald, and Alpha Sapphire, Kyogre is sought after by Team Aqua as part of their plot to create more habitats for aquatic Pokémon by raising the sea level.

Kyogre is the version mascot of Pokémon Sapphire and its remake Pokémon Alpha Sapphire, appearing on the boxart of both.

Along with Groudon and Rayquaza, Kyogre is a part of the weather trio.