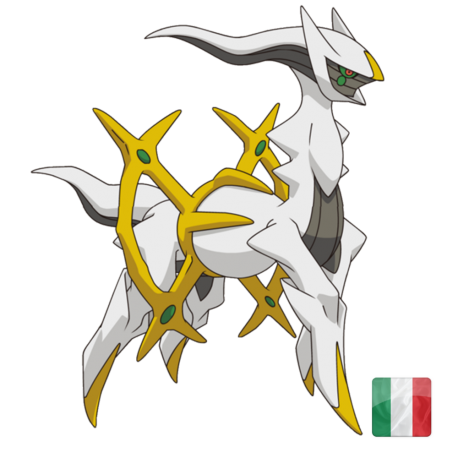 Arceus was distributed to promote the 12th Pokémon movie. He kwows the 3 special moves of Palkia, Dialga and Giratina.

While it is not known to evolve into or from any other Pokémon, it will change type when it is holding a Plate.

Like Darkrai and Shaymin before it, Arceus was not officially recognized by Nintendo until February 14, 2009, the year of its debut movie. It was officially revealed to international audiences on August 3, 2009.

Arceus is known as "The Original One", as it is said that it created Sinnoh and Ransei, and possibly the entire Pokémon universe, along with the lake guardians and creation trio. Arceus can only be found in the wild legitimately with the Azure Flute, which was never distributed at any official event. However, Arceus itself was distributed via multiple Nintendo events in 2009 and 2010 and the Pokémon Global Link in 2012.It is the trio master of both the lake guardians and the creation trio.