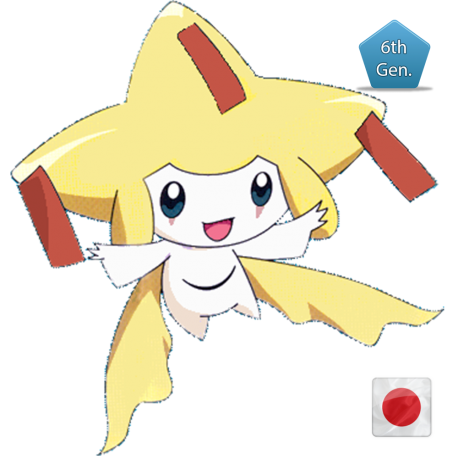 This Shiny Jirachi was Distributed from August 1 to 31 2014 only in Japan.

Jirachi is a small, white, humanoid Pokémon. It has short, stubby legs and comparatively longer arms. There are flaps on the underside of its arms, which give the impression of long sleeves. On its belly is a curved seam, which conceals a third eye, known as its "true" eye. Additionally, it has a normal pair of circular eyes on its face, with small, blue triangular markings underneath. On its head is a large, yellow structure with three points extending outward: one from the top and one on either side. On each point is a blue tag, known as a "wish tag". A rounded extension hangs from either side of the yellow structure, framing Jirachi's face. Two yellow streamers flow from this Pokémon’s back, resembling comet tails.