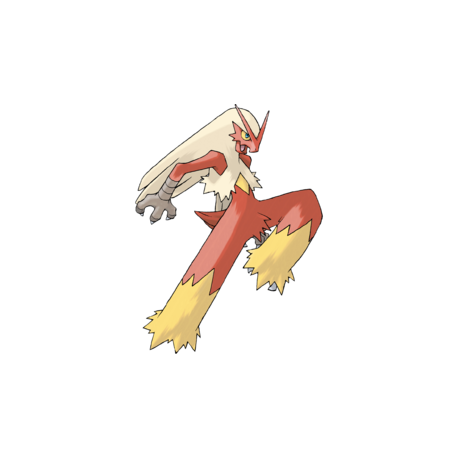 Shiny or non-shiny Blazike with 6 IVs. Hasty Nature and with Hidden Ability. It holds a Blazikenite for the megaevolution. Very competitive pokemon. High HP and Strong in Attack, Special Attack and Speed.

It evolves from Combusken starting at level 36. It is the final form of Torchic. It can Mega Evolve into Mega Blaziken using the Blazikenite.

Blaziken is a bipedal, chicken-like Pokémon. The majority of Blaziken's body is red with accents of beige, yellow, and gray. Behind its head, there are beige, hair-like feathers that continue downward and surround its chest and abdomen. It has a small red face with a V-shaped crest on its head. Blaziken's eyes are semicircular with yellow sclera and blue irises, and its mouth is similar to hooked beak. It has featherless, gray hands with three fingers each, and three clawed toes that are not normally visible due to the shaggy, yellow feathers on the bottom of its legs. A female has a shorter mask and hair than a male.

Blaziken has strong, muscular legs that give it great lower body strength. This lower body strength helps its kicking and jumping abilities. Blaziken's wrists have gray wristband-like markings capable of producing a tuft of fire above them. Blaziken can also make flames spout from its ankles. This allows it to cloak its feet or fists, and it uses these abilities while practicing a form of martial art. These combined abilities allow it to use its former signature move, Blaze Kick. Its flames burn more intensely when it faces stronger opponents. Every several years, its old feathers burn off, and new, supple feathers grow back in their place.

As Mega Blaziken, it loses its yellow markings, and gains black markings on its upper legs and chest. Its hair-like feathers take on a wing-like shape and point upward, and the portion around its chest is rough around its shoulders. The crest on its head changes into a flat horn that curves backward. The fire it creates on its wrists is now longer as well. When Blaziken Mega Evolves into Mega Blaziken, it further hones the power of its kicks, always a source of pride to it. As it unleashes a flurry of savage kicks, its legs can begin to burn from the friction of the surrounding atmosphere.[1]As Mega Blaziken’s body temperature increases, its power and speed continue to ramp up.